Col. Abdul Haq Mirza, who actively participated in the first two Kashmir Wars, is known for designing the flag of Azad Jammu and Kashmir and many symbols for Azad Kashmir Regular Force - AKRF (which later on was merged in Pakistan Army as AK Regiment). He has published his memoirs "The Withering Chinar" in which he explained the meaning of AJK flag and different symbols of AKRF … END_OF_DOCUMENT_TOKEN_TO_BE_REPLACED 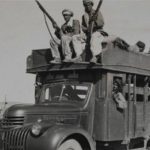 The incident of 22nd October, 1947 is a controversial chapter in the history of Kashmir. India and her friends in Kashmir quote this incident to justify the state's accession to India by Maharaja Hari Singh whereas the Pakistani stance is that it was a natural response by the people of the Tribal Areas to the oppression on Kashmiri Muslims by the Dogra rulers. That they had … END_OF_DOCUMENT_TOKEN_TO_BE_REPLACED