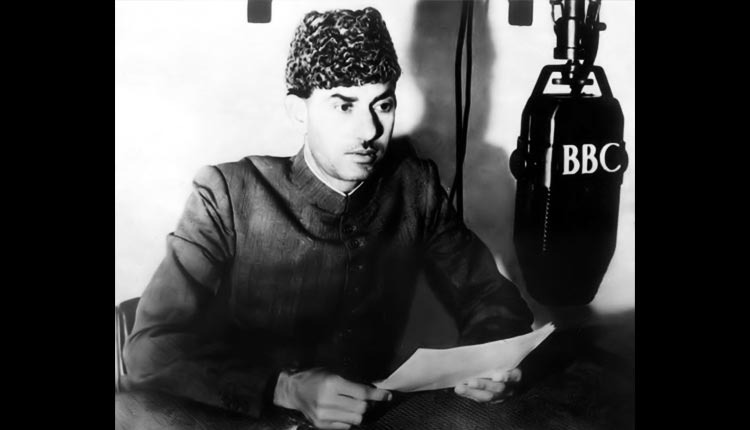 Sardar Muhammad Ibrahim Khan was born on 10th April 1915 at Rawalakot, Poonch. He graduated in arts from Islamia College Lahore in 1935 and sought higher education abroad in 1938. Khan then obtained a law degree from Lincoln's Inn, London, and started practicing law at Srinagar, Kashmir.

He was a political activist by orientation and his stay in London groomed him to have similar rights and privileges back in his state which was ruled by an autocratic family. He was a critic of a lack of civil rights and liberties and deprived of all those human rights enjoyed by Britishers.

Under the Maharajah’s Government in 1943, Khan was appointed as a public prosecutor in Mirpur. He later worked as the Assistant Advocate General of Jammu and Kashmir. Then he left the government job to participate in the Kashmir liberation movement and ran for and won the 1947 Jammu and Kashmir State Assembly (Praja Sabah) elections. He delivered a fiery speech critical of the despotic ruler in the budget session of 1947, hence was kept under strict vigilance.

Pakistan's movement was in full swing. Khan wholeheartedly advocated for the accession of Kashmir state with Pakistan. On 19th July 1947, when Pakistan itself was not in existence except conceptually, the Convention of Muslim Conference passed a resolution demanding the State's accession to Pakistan. It was a landmark day and is commemorated as the day of accession of Kashmir to Pakistan every year. It was not an easy job to risk the life of passing the resolution when there was no country called Pakistan, the state was ruled by an autocratic ruler aided and defended by British and Hindus of India. The last para of the resolution cautioned Maharaja of a revolt by the Muslim if he did not accept their demand of accession to Pakistan. When the leaders realized that the Maharaja was in no mood to accede to Pakistan, but was rather tilted towards India, Gazi-e-Millat risked leaving his family in Srinagar and taking a long journey to Murree and then to Abbottabad to organize a force to liberate the state from the clutches of Dogra ruler. He succeeded in doing so, raised a contingent, arranged for its logistics, and started a full-fledged armed struggle.

It was because of his relentless efforts that by October 1947, a considerable area of the state was liberated. He again risked his life to accept to be president of the area named, “Azad Govt of the state of J&K “, by making a Declaration of Independence of the state on the 24th of October 1947. Set up it headquarters at Junjal Hill, Pallandri. At the time when nobody was willing to be the head of this government on the plea that this step could endanger the lives of their families in Occupied Kashmir, Sardar Ibrahim did that despite the fact that his wife and son were still in Srinagar. Justice Yusuf Saraf writes that people "were not sure as to what would happen to the war and therefore did not want to take the risk of being pinned with the label of being Chief Rebel." It was under these circumstances that Sardar Ibrahim risked himself and his family for the sake of his nation's freedom.

Besides leading from the front on the ground, Gazi-e-Millat, lead the nation politically as president and represented the state in UNSC on a complaint lodged by India accusing tribal armed raid on Kashmir by Pakistan and Azad Jammu & Kashmir. This was a gigantic task when everything was unclear and fluid.

As president, Gazi-e-Millat devoted his full attention to the liberation of the occupied part of Kashmir. When a ceasefire agreement was signed between India and Pakistan on 1st January 1949, Gazi-e-Millat strongly opposed it as against the interests of Pakistan. Serious differences erupted between him and the Govt of Pakistan. Gazi Millat was backed by the people of Azad Kashmir. A mutiny like the situation was created. The Government of Pakistan resorted to deploying the army to quell the boiling situation. Gazi-e-Millat was arbitrarily removed from the office of presidentship on 21 May 1950 to control the situation but failed and ultimately, he was requested by Government to appeal to people for calling off the agitation. This was the biggest political favor by Gazi-e-Millat in favor of Pakistan.

"The Kashmir issue will not be settled in Lake Success but will only be decided on the battle field."

Gazi-e-Millat was elected president of Azad Kashmir for the second time on 13 April 1957, and for the third time on 5 June 1975. He was very close to Zulfiqar Ali Bhutto and had formed the AJK chapter of the Pakistan Peoples Party.

In 1977, General Zia ul Haq dissolved Bhutto's government and offered to allow Khan to continue as president as long as he stopped supporting Bhutto. Khan refused to betray Bhutto, resulting in his termination as president through a proclamation issued by General Zia ul-Haq, the Chairman of Azad Jammu and Kashmir Council, on 30 October 1978. This proclamation was declared void by the Supreme Court of Azad Jammu and Kashmir as without authority, however, much after the death of Zia ul Haq in an air crash in 1987. He made a Great statement in Supreme Court while arguing the case that, “judge sahab Zia is dead. Sirf uska jubra mila tha woh be gull sarr gia hoga, ub faisla Kar dain.”

He was re-elected again as the President of Azad Kashmir in August 1996. He remained in office until August 2001.

He was a great statesman, orator, and writer. A die-hard advocate for the liberation of state and its accession to Pakistan. Accession to Pakistan Resolution and Sardar Muhammad Ibrahim khan has become synonymous.
His book “The Kashmir Saga“ is a living story of the Kashmir movement, events taking place in AJK, and government Pakistan’s policies in relation to Kashmir.

Sardar Ibrahim was a strong advocate for representation for the people of AJK in Pakistan's National Assembly and Senate. For instance, talking to pressmen in Lahore in December, 1953 Sardar Mohammad Ibrahim Khan said that Kashmir should be given a “definite and real” place in the proposed constitution of Pakistan. In November 1973, he said that AJK should have some constitutional links with Pakistan including the provision of symbolic representation of Kashmiris, on both sides of the control line, in the National Assembly and the Senate. The Links should be “transitional arrangements” subject to a plebiscite to be held in Kashmir. He later reiterated his stance in March, 1976 when he was the President of AJK.

Sardar Muhammad Ibrahim Khan died in Islamabad, on 31st July 2003 after a long illness at age 88. His death was mourned throughout the state of Jammu and Kashmir, Kashmiri diaspora, and in Pakistan. His work shall be remembered forever and would be a beacon of light for freedom seekers. May Allah rest his soul in peace.