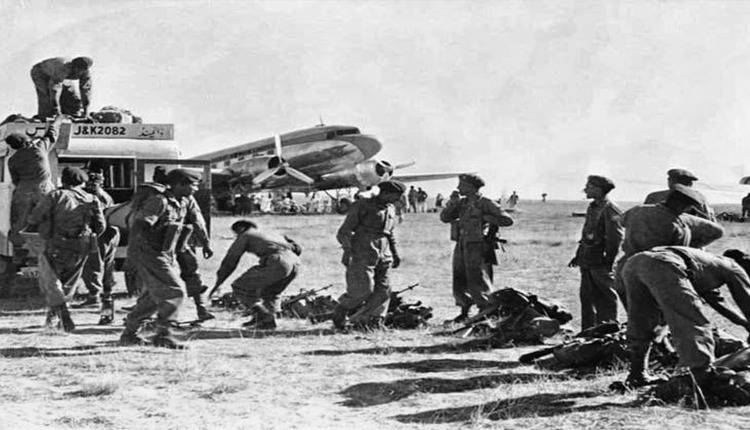 Perhaps the biggest of lies related to the Kashmir dispute is that the Indian Army had arrived in Kashmir only after the tribesmen intruded on 22nd October 1947. Whereas the reality is that the Indian Army was present in different parts of Jammu and Kashmir by 17th October 1947 which means five days before the Tribals came and ten days before the 27th of October. The fact came to the light first when Major Khurshid Anwar wrote that his men encountered the troops from Patiala state at Uri. These troops from Patiala had been sent to the state of Jammu and Kashmir in the first two weeks of October and were present in three different cities/towns of the state namely, Srinagar, Jammu, and Uri by 17th October. By then, these Patiala forces were legally a part of the Indian Army.

Major Khurshid Anwar’s statement was first corroborated by Lieutenant General Lionel Protip Sen of the Indian Army who actively took part in the first Indo-Pak War. L.P. Sen, while sharing his experience about the first days of the war, wrote;

“I was astonished to find a Battery of Mountain Artillery deployed for action. As I stood watching them with equally surprised Intelligence Officer, the Battery Commander came forward to meet me. As a result of our conversation, I learnt that it was the Patiala Mountain Battery which had been sent to the Valley in answer to the request made by the Maharajah of Jammu and Kashmir, and had been in Kashmir for ten days.”

Another Indian Army officer, Major General D. K. Palit, who has authored many books related to war and military history, has this to say regarding this topic;

“The only reinforcements that J&K state forces had prior to the outbreak of hostilities (22nd October, 1947), had been from Patiala State. A request from Maharaja Hari Singh for the military aid had been met by the ruler of Patiala with the despatch of an infantry battalion to Jammu, presumably to replace the local garrison which had been sent forward to Mirpur-Poonch area, and a Mountain Battery, which had been sent up to the Kashmir Valley.” [Maj. General D.K. Palit, Jammu and Kashmir Arms: History of the J&K Rifles, page. 197]

Famous historian Alastair Lamb has quoted the above mentioned Indian sources and has explained this topic in detail. An extract from his book has been reproduced hereunder for the sake of readers;

“The Government of Jammu and Kashmir during this crucial period was also in contact with the Rulers of a number of Indian States who, despite their own accession to India, may to some degree have been operating independent policies. The Sikh Maharaja of Patiala, for example, in the first two weeks of October 1947 provided his colleague in the State of Jammu and Kashmir with a battalion of infantry and a battery of mountain artillery from his own State Armed Forces…When Indian troops finally intervened in Jammu and Kashmir on 27 October 1947 they found, apparently to their surprise, Patiala gunners already guarding the vital Srinagar airfield, where they had been encamped since at least 17 October. The Patiala Infantry was stationed in Jammu as reinforcements for the garrison of the Maharaja’s winter capital…It is possible that they were moved as part of the supply convoys despatched to Jammu and Srinagar by the Government of India in reply to the alleged Pakistani “blockade”. Shortly after the formal intervention of the Indian Army the Maharaja of Patiala, Yadavindra Singh, came to Jammu to command his contingent in person.

In that, by October 1947 the Patiala State forces had by the terms of the State’s accession to India (as part of the Patiala and East Punjab States Union) on 5 May 1947 come under the control of the Government of the Indian Union at the moment of the Transfer of Power, this deployment of Patiala State troops raises a number of questions which have yet to be answered, not least how they actually managed to reach the State of Jammu and Kashmir without the fact being reported to the senior British commanders still in the service of the Indian Army (who would surely have informed Mountbatten had they known). The arrival of such exotic forces could hardly have escaped the notice of the Indian Army observer in the State, Lt. Colonel Kashmir Singh Katoch. While it is probable that some members of the Indian leadership, including perhaps Sardar Vallabbhai Patel and Baldev Singh, were aware of this development.” [Alastair Lamb, Kashmir: A Disputed Legacy 1846-1990, Roxford Books, 1991. page. 131]

On a rather different occasion, Alastair Lamb, upon the basis of some published Patiala sources, says that all this had happened at the behest of Jawaharlal Nehru. To quote him;

“Published Patiala sources, which have surely been heavily doctored to accord with the chronology of established Indian mythology, suggest that this intervention took place at the personal request to the Maharaja, Yadavindra Singh, by Jawaharlal Nehru.” [Birth of a Tragedy: Kashmir 1947, Roxford Books, 1994 , page. 71]

While discussing the legal position of these Patiala troops, the same author writes;
“The legal position of the Patiala troops in Kashmir is interesting. As a State which had acceded to India, Patiala had handed over to the Government of India all powers over the defence and foreign relations: this was a standard condition of accession. It meant that at the moment of the Transfer of Power the State Armed Forces were taken under the command of the Armed Forces of India, and their deployment beyond the Indian external borders (as the State of Jammu and Kashmir was situated prior to joining India) was without doubt from that time a matter of foreign policy which could only be authorized by the Government of India at the highest level. It would seem to follow, therefore, that either the Patiala men were in Kashmir in blatant violation of the de facto Indian Constitution or that their presence was approved by New Delhi. If the former, then their status on the most charitable interpretation was very similar to that of the Pathan tribesmen: if the latter, then the Government of India was sponsoring direct military involvement in the State of Jammu and Kashmir before the tribal “aggression”, let alone the Maharaja’s accession.”

Similarly, another well-known historian and political scientist, Robert G. Wirsing comments;
“There is little doubt that the Patiala matter deserves inclusion among those military developments preceding accession that seem to link New Dehli with a more aggressive posture toward Kashmir than the Indian government itself has normally conceded. After all, who could believe that the dispatch of these troops to Kashmir, following Patiala’s accession to India and at a singularly critical moment in the subcontinent’s history, would have been done without the full knowledge, approval, and cooperation of the Government of India?” [Robert G. Wirsing, India Pakistan and the Kashmir Dispute, page. 51]

These soldiers from Patiala Regiment were also involved in genocide of Muslim civilians, especially in Jammu. In this connection, Muhammad Yusuf Saraf writes;

“A few days before the entry of tribesmen, the Maharaja of Patiala had sent an infantry battalion and a Mountain Battery of the Patiala State forces, The former was posted at Jammu while the latter took up position on the Badami Bagh side of the air-field in Srinagar. The Infantry battalion collaborated with the Dogra army and local non-Muslims in the genocide at Jammu but the Mountain Battery which had apparently taken position in the airfield was presumably feeling shy of coming in contact with the tribesmen…The commander had been given no targets and his guns were without dial sights. In the confusion that prevailed, neither were they given these dials nor did they ask for them, perhaps because of having been used to the killing of defenseless civilians, they were afraid of facing expert marksmen like the tribesmen. It is also possible that they were afraid of retribution for the crimes they had already committed in Patiala and perhaps elsewhere in East Punjab.” [Yusuf Saraf, Kashmiris Fight for Freedom. Vol. II, page. 195]

These troops from Patiala had also helped the Indian Army in protecting the Srinagar’s airport from the advancing tribesmen. In this connection, Christopher Snedden writes in his book “Understanding Kashmir and Kashmiris”;

“New Dehli..dispatched the Indian Army to Srinagar on 27 October 1947. There was some uncertainty whether the Indian Army would land in Srinagar and whether they would meet opposition. Their initial aims, therefore, were to secure Srinagar’s Airport, if possible, then to defend J&K’s summer capital from the advancing Pakhtoons. They achieved both aims, including with some unexpected help in the former task from a small battery of gunners from Patiala who, surprisingly but advantageously, were stationed at Srinagar airport.”

An Indian journalist Prem Shankar Jha whose father (Chandra Shekhar Jha) had represented the Indian case on Kashmir at United Nations also confirms that Indians troops from Patiala were stationed in Kashmir. Prem Shankar Jha, who blames Muslim League and the tribesmen for instigating the JK dispute, writes;

“[It’s a] fact that Patiala troops were in Kashmir before the instrument of accession was signed.” [Prem Shankar Jha, Kashmir 1947: Rival Versions of History, Oxford University Press, 1996. page. 25]

Similarly, Victoria Schofield also confirms the presence of Patiala Regiment in the state before 22nd October but she is not confirmed about the exact date “when the Patiala state forces arrived”. (See. Victoria Schofield, Kashmir in Conflict: India Pakistan and the Unending War, page. 52)

Therefore, in light of the above discussion, it can be said, without any doubt, that Indian soldiers had arrived in the cities of Jammu and Srinagar before 17th October and Tribals were not the first who “invaded” the state.

Author hails from AJK, Pakistan and is a medical student at Rawalpindi Medical University. He can be reached at ahsanakram661@gmail.com.