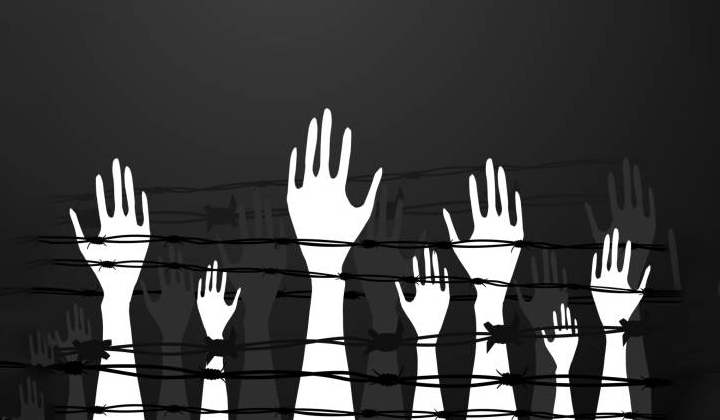 On the afternoon of July 10, the Bosnian Serb army soldiers began storming Srebrenica, a city of refuge created by the United Nations, where more than 40,000 people sought shelter from war.

A United Nations officer in the town hunched over his computer and tapped out a desperate plea to his leaders in Geneva; about 23,000 Muslim women and children were deported in the next 30 hours, and 8,372 innocent Bosnian Muslim men and boys were mercilessly murdered.

The ‘Srebrenica massacre’ is widely acknowledged by genocide scholars as the biggest war crime perpetrated on European soil Since World War II, for which Ratko Mladic, the “Butcher of Bosnia”, “the epitome of evil”, was convicted by international war crimes tribunal for crimes that were “amongst the most heinous known to humankind”.

However, Jammu Kashmir, South Asia’s Himalaya region, which is disputed between two nuclear neighbours-India & Pakistan, witnessed the worst human carnage much before the ‘Srebrenica massacre.

In November 1947, thousands of Muslims were killed, which commonly referred to as the ‘Jammu genocide’ in the winter capital of disputed territory by paramilitaries led by the army of Dogra ruler Hari Singh. The death toll in this genocide was 28 times higher than in Srebrenica.

The pre-planned ethnic cleansing was carried out to secure an area bigger than Bosnia, Croatia, and Serbia put together. The Times, London reported on August 10 1948, “237,000 Muslims were systematically exterminated … by the forces of the Dogra State headed by the Maharaja in person and aided by Hindus and Sikhs. This happened in October 1947, five days before the Pathan invasion and nine days before the Maharaja’s accession to India”.

“The Muslim subjects from different parts of Jammu province were forcibly displaced by the Dogra Army in a programme of expulsion and murder carried out over three weeks between October-November 1947,” Idrees Kanth, a fellow at the International Institute of Social History in Amsterdam, who researched the 1940s history of Kashmir, told Al Jazeera.

“The massacre of more than two lakh (two hundred thousand) Muslims was state-sponsored and state-supported. The forces from Patiala Punjab were called in; Rashtriya Swayamsevak Sangh (RSS), a right-wing Hindu organisation, was brought to communalise the whole scenario and kill Muslims,” said PG Rasool, the author of a book, ‘The Historical Reality of Kashmir Dispute’.

In the words of Ved Bhasin, a renowned journalist from Jammu who experienced the events first-hand, large-scale killing of Muslims took place in Udhampur district, particularly in Udhampur proper, Chenani, Ramnagar and Reasi areas. Even in Bhaderwah (about 150 kilometres from Udhampur), a number of Muslims were victims of communal marauders.

According to Bhasin, the RSS played a key role in these killings. Muslims were also massacred in Chhamb, Deva Batala, Manawsar and other parts of Akhnoor. In the Kathua district, too, there was the large-scale killing of Muslims and reports of women being raped and abducted. However, terrible carnage took place later when the Muslims in Talab Khatikan area were asked to surrender. They were shifted to the police lines at Jogi gate, where now Delhi Public School is situated. Instead of providing them with security, the administration encouraged them to go to Pakistan for safety.

The first batch of several thousand of these Muslims was loaded in about sixty Lorries to take them to Sialkot. Unaware of what was going to happen to them, these families boarded the buses. Troops escorted the vehicles. However, when they reached near Chattha on the Jammu-Sialkot road, on the city’s outskirts, a large number of armed RSS men and Sikh refugees were positioned there. They were pulled out of the vehicles and killed mercilessly, with the soldiers either joining [in] or looking [on] as idle spectators. The news about the massacre was kept a closely guarded secret.

The next day another batch of these Muslim families were similarly boarded in the vehicles and met the same fate. Those who somehow managed to escape the wrath of killers reached Sialkot to narrate their tale of woe.

Bhasin recalls an incident where Mr Mehr Chand Mahajan, the then Prime Minister, told a delegation of Hindus who met him in the palace when he arrived in Jammu that now when the power was being transferred to the people, they should demand parity. One of them, associated with the National Conference, asked him how they can demand parity when there is so much difference in population ratio.

Pointing to the Ramnagarrakh below, where some bodies of Muslims were still lying, he said, “The population ratio too can change”. Maharaja’s PM was only revealing their plan. As a result of this planned ethnic cleansing, Muslims who were a majority (61 per cent) in the Jammu region became a minority.

The Maharaja had initiated a systematic tyrannical campaign against the ‘dissenters’ as early as the outset of May 15, 1947.

India’s Father of the Nation Mahatma Gandhi’ while commenting on the situation in Jammu on December 25 1947, said, “The Hindus and Sikhs of Jammu and those who had gone there from outside killed Muslims. The Maharaja of Kashmir is responsible for what is happening there, Muslim women have been dishonoured.”

The Jammu massacre, as it appears, was a long-planned event. The coordination of the State forces with RSS and forces from Patiala clearly point towards planned coordination at the highest levels in India.

The question is, why would Mountbatten risk the lives of hundreds of Britishers and not do the obvious unless he knew that preparations were already afoot to airlift Indian forces to Kashmir? As things appear, it needs to be seen if Nehru, Patel and/or Mountbatten were in on the planned Jammu genocide to ethnically cleanse the area so that if Kashmir is lost to Pakistan, Jammu can be incorporated into India?

Even a superficial scrutiny of the Jammu Genocide reveals a planned carnage of killings, rapes, torture, plunder and forced migrations of the Muslims of Jammu by the Hindu Dogra forces, RSS Hindu Extremists and Hindu forces of the Patiala, along with others. The planned genocide led to the conversion of the Muslim majority into a minority in Jammu.

After 75 years of Mass genocide in Jammu, the Indian government is executing a similar pattern by settler colonial machination in IOJK. Since Aug 05, 2019, when India robbed the Special status of disputed territory, they have normalized the settler colonial project by bringing a massive change in the constitution and other laws which paved the way for non-Kashmiris to settle & seek jobs in Muslim majority regions.

Theodor Herzl, founding father of Zionism, observed that settler colonialism destroys to replace. In his novel, he said If I wish to substitute a new building for an old one, I must demolish it before I construct. India is doing a similar thing in Kashmir to change the demographic status of the Muslim majority into a minority. Even the question of genocide is never far from a discussion of these brutal settlements for example white settlers wiped out indigenous Tasmanians by executing genocide against the tribes.

The UN genocide watch issue alert Post August 05 2019 for occupied Kashmir, in which it identified the genocidal process, based on Dr Stantton’s 10 stages of Genocide. According to Dr Stanton, the persecution of Kashmir’s Muslims has increased significantly on Prime Minister Modi’s watch. “So many of the early stages of genocide are already present. We don’t wait until it is a full-out mass killing campaign to declare genocide. There are early warning signs of genocide now and that’s what we believe is the situation in Kashmir

Recalling what former Secretary-General Kofi Annan said about the “Srebrenica massacre”, “The tragedy of Srebrenica will forever haunt the history of the United Nations.” Tantamount to this is the forgotten human carnage in the Jammu genocide which would always be reminiscent of humanity’s dark side.