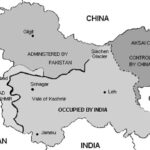 The state of J&K being a princely state, its Hindu ruler was empowered under the Indian independence Act 1947, to accede either to India or Pakistan, keeping in view the demographic composition of its population. The working committee of All Jammu and Kashmir Muslim conference with a predominant majority of Muslim seats in the Kashmir Assembly had passed a unanimous … END_OF_DOCUMENT_TOKEN_TO_BE_REPLACED