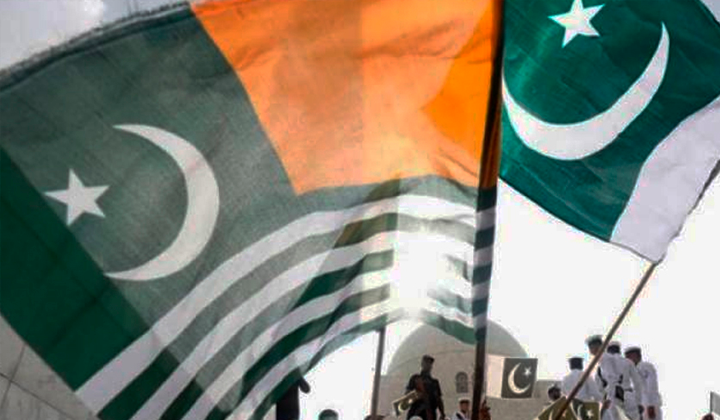 About 500,000 Kashmiris have laid down their lives for Jammu and Kashmir’s freedom from Indian occupation and its Accession to Pakistan during the past seven decades. It said the worst kind of Indian brutalities has failed to wipe out the Kashmiris’ love for Pakistan.

On 19th July 1947, genuine representatives of the Kashmiris unanimously passed the resolution of Kashmir’s Accession to Pakistan during an emergency convention of the All Jammu and Kashmir Muslim Conference at the residence of Sardar Muhammad Ibrahim Khan in Aabi Guzar area of Srinagar. The historic resolution called for the Accession of the State of Jammu and Kashmir to Pakistan in view of its existing religious, geographical, cultural, and economic proximity to Pakistan and the aspirations of millions of Kashmiri Muslims.

The convention was presided over by Chaudhry Hamid Ullah Khan, and the resolution was presented by Khawaja Ghulam-ud-Din Wani and Abdul Rahim Wani, with 59 prominent leaders in attendance. The historical resolution of 19 July 1947 calls for the Accession of J&K to Pakistan considering its religious, cultural, and geographical proximity to Pakistan and the aspirations of the Kashmiri Muslims.

The resolution was unanimously adopted on 19th July 1947 showing a political and constitutional stance. It indicated that existing religious, geographical, cultural, and economic ties and the aspirations of millions of Kashmiri Muslims warrant accession of the state of Jammu and Kashmir (J&K) to Pakistan. During the partition of the Sub-continent, the people of the state of Jammu and Kashmir which comprised a Muslim majority decided to join Pakistan according to the British-led formula. But, Dogra Raja, Sir Hari Singh, a Hindu who was ruling over the J&K in connivance with the Indian Prime Minister Jawaharlal Nehru and Governor General Lord Mountbatten joined India.

The resolution stated: “This convention of Muslim Conference has reached the conclusion that geographical conditions, 80 percent Muslim population, important rivers of Punjab passing through the state, language, cultural, ethnic and economic relations and continuity of the state with Pakistan make it imperative to merge with Pakistan”.

The resolution was adopted following the announcement of the Partition Plan of the Indian subcontinent by the British Government that the princely States were free to accede to either of the two newly established countries, Pakistan and India. The decision of 19th July 1947 was a testimony to the fact that the people of Kashmir had linked their future with Pakistan.

Jammu and Kashmir were geographically, historically, culturally, and ethnically part of Pakistan but India’s policy of deceit and deception, expansionism, and perpetual denial to implement the UN resolutions on Kashmir had pushed the region into a quagmire of uncertainty.

The development had come almost a month before the creation of two sovereign states of Pakistan and India under the Partition Plan of the British Indian colony on August 14 and 15 respectively, the same year.

As per the understanding behind the Partition Plan, the Princely States were free to accede to either of the two newly established countries. The decision of 19th July 1947 was a testimony to the fact that the people of Kashmir had linked their future with Pakistan. They took the decision of joining Pakistan to protect their political religious, social, cultural, and economic rights, as they were well aware of their fate under Hindus who had deep-seated animosity for Muslims in Jammu and Kashmir.

The report said that Indian forces invaded Srinagar on October 27 1947 and forcibly occupied Jammu and Kashmir in utter violation of the partition plan and against the wishes of the people of Jammu and Kashmir.

When Pakistan responded militarily against the Indian aggression, on December 31, 1947, India made an appeal to the UN Security Council to intervene and a ceasefire ultimately came into effect on January 01, 1949, following UN resolutions calling for a plebiscite in Kashmir.

It is mentionable that the Security Council adopted resolution 47 (1948) on 21 April 1948, which promised a plebiscite under UN auspices to enable the people of Jammu and Kashmir to determine whether they wish to join Pakistan or India. Later, India backed out of its promise of holding a plebiscite.

Kashmiris are continuing struggle to translate the idea of accession of J&K to Pakistan under the spirit of the 19 July 1947 resolution.

The historical resolution of 19 July 1947, the Kashmiris demand said, thwarted the nefarious plans of Indian and British rulers against Muslims. Kashmiris will not rest until fulfilling their dream of freedom from the Indian yoke and accession with Pakistan.

India had illegally and by military might have occupied Jammu and Kashmir while Kashmiris were struggling and paying sacrifices for their just cause and freedom of Kashmir from Indian bondage.

Despite all this, Dogra regime, Sir Hari Singh, a Dogra Hindu who was ruling over the J&K in connivance with the Indian Prime Minister Jawaharlal Nehru and Lord Mountbatten, the then Governor General of India joined India.

The design to forcibly wrest Kashmir began to unfold on August 16, 1947, with the announcement of the Radcliffe Boundary Award. When the Award was announced, it did a great injustice by awarding the Gurdaspur District—a majority Muslim area to India so as to provide a land route to the Indian armed forces to move into Kashmir.

A new saga of Kashmir’s sufferings started with the invasion of Indian armed forces in occupied Kashmir on October 27 in 1947. India landed its army in Jammu and Kashmir setting aside the Indian Independence Act, and Partition Plan in 1947, and more importantly the aspirations of the Kashmiri people.

The Partition Plan had given the then princely states the choice to accede either to Pakistan or India, keeping in view the geographical situation and communal demography but India forcibly occupied Hyderabad, Junagarh, and Jammu, and Kashmir. Hyderabad and Junagarh were Hindu-majority states but their rulers were Muslims. Jammu and Kashmir was a Muslim-majority state and had a natural tendency to accede to Pakistan. India claims that it landed its troops in Jammu and Kashmir following an instrument of accession between the ruler of the territory and the governor-general of India. However, many neutral observers reject the existence of any such document on the ground that had it been there Indian government would have made it public either officially or at any international forum. Indian troops, the forces of Dogra Maharaja, and Hindu extremists massacred over three hundred thousand Kashmiri Muslims within a period of two months with the intention to change the demographic composition of the territory.

Pakistan’s affinity with the people of Kashmir can be understood in the backdrop of several reasons. Both share strong bonds in respect of religion, geography, culture, and aspirations. The worst kind of Indian state terrorism in occupied Jammu and Kashmir since 1947 has forced hundreds of thousands of Kashmiri people to migrate to Pakistan from the occupied territory and the main driving force behind their freedom movement has been their strong emotional attachment to the country.

As the matter of fact is that the Kashmir dispute is considered both by Pakistanis and Kashmiris as an unfinished agenda of the partition of the South Asian sub-continent in 1947 and the liberation struggle of the people of Jammu and Kashmir as an inseparable part of the Pakistan movement.

The leaders of Pakistan have always represented the Kashmiris’ aspirations and never betrayed the faith reposed on them by the Kashmiri people. It was his commitment to the interests of the people of Kashmir that drove the father of the nation, Quaid-e-Azam Muhammad Ali Jinnah, to visit Jammu and Kashmir three times before 1947. He had rightly termed Kashmir as the “Jugular Vein” of Pakistan. Former Prime Minister, Zulfiqar Ali Bhutto, had vowed to wage a thousand-year war for Kashmir. Former Prime Minister Imran Khan and the Army Chiefs are forcefully advocating the settlement of the dispute over Kashmir in accordance with the Kashmiris’ aspirations in line with the relevant UN resolutions for ensuring durable peace in South Asia.

Pakistan always categorically announced that Pakistan would not accept Indian dictation over Kashmir, and Kashmir will top the agenda of the dialogue with India. It is a reality that despite being the victim of Indian military aggression for supporting the Kashmiris during the past more than seventy-four years, Pakistan never gave up its support to the Kashmir cause and continues to advocate resolution of the dispute to the satisfaction of the Kashmiri people.

The Hindutva organizations including Bharatiya Janata Party (BJP) and Rashtriya Swayamsevak Sangh (RSS) had a long design of fully controlling occupied Kashmir in India and dominating the Hindu civilization in this Muslim Majority region.

And implementing the settler-colonial plan in occupied Kashmir on the Israeli pattern to deprive the people of Kashmir of their identity, economy and homeland, thus turning Kashmir into another Palestine.

The Hindutva Indian government started its nefarious plan by violating international laws on August 05, 2019, by repealing Articles 370 and 35A of the Indian Constitution that granted special status and rights to occupied Kashmir and its residents. The abrogation of these constitutional provisions has paved the way for the non-Kashmiri mostly the Indian Hindus to get permanently settled in Jammu and Kashmir. This move is aimed at turning the Muslim majority into a minority to alter results in favor of India in the plebiscite to be held at any time in the future under the UN auspices. The world remains unaware of the sufferings of the people of the occupied territory and the happenings taking place on the ground since August 05, 2019, due to the military siege and the communication lockdown imposed by the Indian authorities.

At the same time, under the Modi regime, Indian troops and paramilitary intensified cordon and search operations to intimidate the people of the occupied Kashmir into submission.

The Modi government also extended several federal laws and introduced new domicile, land, and media rules to occupied Kashmir. It has now granted domicile status to non-Kashmiris in Jammu, in gross violation of the UN resolutions and international law, which is the first major step towards altering the demographic composition of the Jammu and Kashmir territory.

It is high time for the world community particularly the UN, to take cognizance of India’s violation of international law and brutal actions in occupied Jammu Kashmir and hold it accountable for violating the international laws in Jammu and Kashmir and initiate measures for settling the Kashmir dispute in accordance with aspirations of people of Kashmir.

Raies Mir is a journalist and human rights activist from Indian Occupied Kashmir.